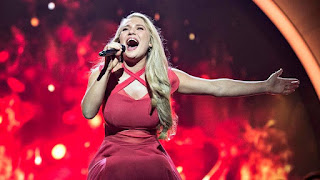 The Danish national final of "Dansk Melodi Grand Prix 2017" took place last Saturday in Hersing, hosted by Johannes Nymark (former Lighthouse X) and Annette Heick. The show included 10 potential Eurovision entries. In the end it was Anja Nissen who won the competition with "Where I Am".

After the first voting round the list was shortened to the TOP 3 contestants by a combination of jury (50%) and public (50%) voting.

TOP 3
After a second voting round the clear winner was Anja Nissen with 64% of the votes. She will represent Denmark at the Eurovision Song Contest 2017 in Kyiv with "Where I Am".

Anja Nissen already was part of the Dansk Melodi Grand Prix 2016 and finished 2nd, behind Lighthouse X, with the song "Never Alone". Anja is also well known for winning 2014 the third edition of The Voice Australia. Watch here her amazing version of Whitney Houston's "I Have Nothing".

Anja Nissen will representing Denmark at the Eurovision Song Contest 2017. She will participate in the second semi-final on 11th May 2017.

Support Anja Nissen and her music. Download her Eurovision entry "Where I Am" on iTunes or listen to her last years entry "Never Alone" on Spotify:

Find out more about Anja Nissen and follow her: