This countdown is a collaboration with:
The 250 most voted songs will be broadcast today, starting at 11:00 am and ending during the last hour of the year, at around 11:45 pm. 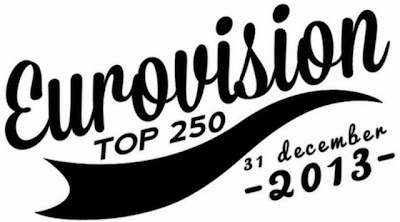 Finnish jury made their decision about the TOP 12 (from 240 demo tapes) artists which could represent Finland next year in Copenhagen.

More about the 12 artists with a song snippet you find here:
What do you think about them? Which one could be the best chance to get the ticket for ESC?

I'm not sure yet.. For now there are three songs which I would say 'nice'. It is from Jasmin Michaela, Clarissa feat. Josh Standing and Hukka ja Mama.

NORWAYs way of selection their participant

Come back. We will give you the links to Norwegian finalists as soon as we do have artist and the songs.
Posted by Unknown at 10:38 PM No comments:

There are rumors about that maybe Paula Seling and Ovi Jacobsen will represent Romania again.

Paula and Ovi represented Romania in 2010 in Oslo with their powerfull song "PLAYING WITH FIRE". It was very sucessful for the romanian artists. The song got the 3rd place behind the winning song "SATELLITE" from Lena (Germany) and "WE COULD BE THE SAME" from turkish band called maNga.

You remember the song?


On 12th December Ovi Jacobson released on his official youtube channel a 30 second snippet for the duet called "MIRACLE"...

There you go.. check out the duet teaser from Ovi & Paula's "MIRACLE".

In my opinion it's a very good choice to send them again to the Eurovision Song Contest.

For now nothing is official confirmed, but it's a big sign that both are intrested to represent Romania once again....

Ovi is talking in an interview about the work on his new album and about a possible participation on Eurovision. More details will follow soon by the artists, its written in a report on romanian online interview (Libertatea.ro)

Sources:
Posted by Frank at 7:52 PM No comments:

Sweden will start their ESC - competition on 1st of February in Malmö with the first competition. In the 54th Melodifestivalen there will be 4 rounds (each Saturday starting in Malmö, Linköping, Göteborg and Örnsköldfik) a second chance show in Lidköping before the winner and Swedens participant for the ESC will be announced at the 8th of march in Stockholm. Back again in the competition is Alcazar, which already took part in 2003, 2005, 2009 and 2010!

More to come later on! As soon as we know the Swedish finalists, we will posts them!

The complete line-up you can find here
Posted by Unknown at 7:09 PM No comments:

Today Germany pubished 7 artists for the german natinal selection.
The eigth artist will be a young talent chosen through a online plattform and via the Club Concert on 27th February 2014 in Hamburg.

Here are the acts:
Well.. I think this is a very interesting combination of artists. The very famous ones are the last four names. Maybe THE BASEBALLS or SANTIANO could be fun. This year I would like to see a group on Eurovision stage. The last years we only had one artist (LENA, ROMAN LOB, CASCADA..) on stage to represent Germany. Maybe it's time for something new...
More details about the German national selection you can find on UNSER SONG FÜR DÄNEMARK.
Sources: