Switzerland: Timebelle to Kyiv with "Apollo" 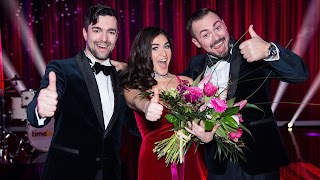 The Swiss national final of "Die Entscheidungsshow 2017" took place last week in Zürich. The line-up included six candidates with their potential entry. In the end it was the fan favorite Timebelle who won the competition.

This was the full line-up:

The show was hosted by Sven Ebeny. Guest in the show was Sebalter  who represented 2014 Switzerland at the Eurovision Song Contest with "Hunter Of Stars". He performed his new single "Weeping Willow".

Timebelle will perform in the second semi-final of the Eurovision Song Contest 2017 in Kyiv on 11th May 2017. Here you can see the performance of "Apollo".

It's the second try for Timebelle to represent Switzerland in Eurovision. Timebelle have been part of the national selection in 2015 with the song "Singing About Love", ending on second place behind Melanie Rene, who won the competition with "Time To Shine".

Support Timbelle and their music. The Eurovision entry "Apollo" isn't already available. In the meantime listen to their latest EP "Desperado" and download it on iTunes or listen to it on Spotify:


Find out more about Timebelle here: