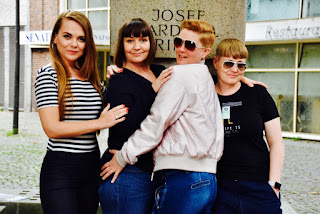 The Lesbian performance band The Hungry Hearts participated in this years Norwegian national selection of "Melodi Grand Prix" in collaboration with Lisa Dillan and the song "Laika".

Well, the ladies didn't made it to Stockholm as representative from Norway, but they have been invited to perform in Stockholm in the main Eurovision week.

"Each person have their own understanding of the message in Laika. For some it is a weird dark disco apocalypse, for others it is an epic song. When I wrote it I did not think so much about a message. I just thought about Laika and her brutal destiny - and I thought about being alone in the atmosphere. I don't accept death as a concept and I am terrified of dying or being left alone somewhere where there are no other human beings..." said Tonje in our interview earlier this year about "Laika".

The Hungry Hearts have been very busy in the last weeks performing on some pride events in Oslo, Tel-Aviv and last week on Cologne Pride in Germany. We met Tonje, Edith, Olga and Henriette for a very lovely interview and a short sightseeing tour through Cologne. They spoke about MGP, their experiences in Stockholm and their plans for Eurovision 2017. The interview will be online in the next days, so stay tuned..

In the meantine you can watch here some of the videos from their performance from the opening evening on main stage on Heumarkt in the heart of Cologne...

As tribute to the victims of the Orlando attack The Hungry Hearts performed their special "Laika" version with "Streets of Orlando, with my boyfriend":


The song "In Your Face" they performed together with the German lesbian icon Hella von Sinnen.

Support The Hungry Hearts and their music. Download their MGP-entry "Laika" and the album "Dyke Forever" on iTunes or listen to it on Spotify:

Find out more about The Hungry Heartsand follow them: