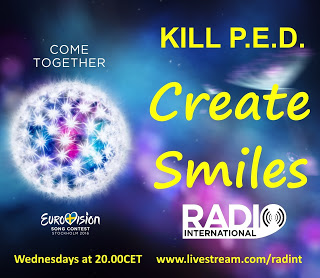 The Team of Radio International would like to invite you to the weekly editions of the show with music, interviews, fun and lots of Eurovision Song Contest.  Join in this Wednesday, 20th July 2016, live from 8-11pm (cet) for the show.

Join Radio International on Wednesday, 20th July 2016 from 8:00 - 11 pm (cet), via the website or on FM. Radio International is available live via  www.radiointernational.tv and on FM 106.8, Digital Cabel Channel 781 in parts of the Netherlands and via  www.livestream.com/radint. In addition, you can pick up Radio International on Malta's Galaxy 105 every Monday from 1:00 - 4:59 pm (cet) hours CET and in Belgium on eurovisiOradio.eu every Sunday evening from 7:00 - 10:59 pm (cet) and again on Tuesday evenings from 8:00 - 11:00 pm (cet). Should you not be able to listen live, the show will appear in the Programme’s Show Archive a few hours after it’s airing on the radio.

Follow those links and be always up to date about Eurovision Radio International:
Posted by Unknown at 7:08 PM