One year ago represented Monika Linkyte together with Vaidas Baumila and the song "This Time" Lithuania at the Eurovision Song Contest 2015 in Vienna. The lovely couple ended on 18th place in the Grand Final with 30 points.

A few months later released Monika her debut album "Walk With Me". Some days ago premiered Monika Linkyte a brand new song called "Padovanojau" on youtube.


Support Monika Linkyte and her music. Download her latest album "Walk With Me" on iTunes or listen to it on Spotify: 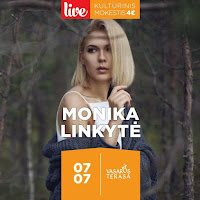 Find out more about Monika Linkyte and follow her:
Posted by Unknown at 8:07 PM