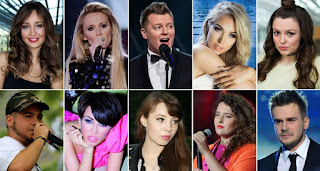 TVP, Polish broadcaster, announced on 11th February details for their national selection "Krajowe Eliminacje 2017". Ten contestants are announced with their songs. One of the hopefuls is Martin Fitch. He represented as Marcin Mrozinski (original name) Poland at the Eurovision Song Contest 2010 with the song "Legenda".

Here you can already listen to some of the songs:

Michal Szpak won "Eurowizija 2016" and represent Poland at the Eurovision Song Contest 2016 in Stockholm. His song "Colour Of Your Life" ended on 8th place in the Eurovision final with 229 points.


The winner of the Polish national final will be honored to represent Poland at the Eurovision Song Contest 2017 in Kyiv. Who will participate in the first semi-final on 9th May 2017 in Ukraine? Stay tuned..

Find out more about Eurovision in Poland here: