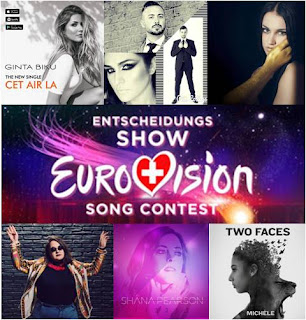 Tonight it's decision time for Switzerland. The Swiss national final of "Die Entscheidungsshow 2017" takes place tonight live in Zürich. There are six songs in the battle to win this competition for representing Switzerland at the Eurovision Song Contest 2017 in Kyiv.

The show will be hosted by Sven Ebeny. Switzerland was represented by  Sebalter three years ago in Copenhagen with "Hunter Of Stars".  Tonight he is guest in the show and will perform his new single "Weeping Willow" from his new album "Awakening".

Watch the videos from the live check here.


The Swiss national final of "Die Entscheidungsshow" starts tonight at 8:05 pm (cet) and can be follwed on SRF live stream or streamed on youtube:

In the last days we did a interview with one of tonights hopefuls, Freschta, read it here:

Rykka won "Die Entscheidungsshow 2016" and represented Switzerland at the Eurovision Song Contest in Stockholm with the song "The Last Of Our Kind", but she failed to qualify to the Eurovision final. Some weeks ago released the Canadian singer Rykka her new album "Beatitudes".


The winner of "Die Entscheidungsshow 2017" will be honoured to represent Switzerland at the Eurovision Song Contest 2017 in Kiev. Who will participate in one of the semi-finals on 9th or 11th May 2017 in Ukraine? Stay tuned...