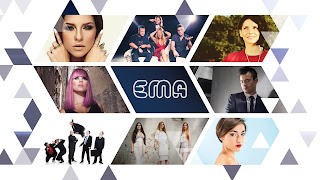 Slovenian broadcaster RTVSLO revealed earlier this year 16 acts for the national selection "EMA 2017". 16 contestants are in the battle in two semi-finals to get a ticket to the national final on 24th February 2017. The first semi-final takes place on 17th February 2017 and now you can listen to snippets of the entries..

Four out of eight from each semi-final will qualify to the national final on 24th February 2017. Two of them with the highest score from the audience and two more chosen by a expert jury.


ManuElla won "EMA 2016" and represented Slovenia at the Eurovision Song Contest 2016 in Stockholm. Her song "Blue and Red" failed to qualify to the Eurovision final.

The winner of "EMA 2017" will be honored to represent Slovenia at the Eurovision Song Contest 2017 in Kyiv. Who will participate in the first semi-final on 9th May 2017?