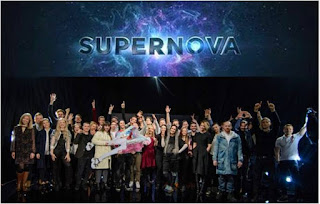 During a press conference announced LTV, Latvian broadcaster, on 13th January 2017 22 candidates for this years national selection "Supernova 2017". The national final takes place on 26th February 2017 in Riga. In two heats and a semi-final four candidates will be selected for the next round. Two of them chosen by the audience and two more from a jury panel. The winner will be chosen via 100% public voting.

Some of the names are already known from former participatation. Markus Riva is part of the Latvian national selection since 2014. The best result for him was 2015, as he ended #2 with "Take Me Down". Katrīna Cīrule, My Radiantu You and Miks Dukurs are also returning.

You can listen to all the entries on a Spotify-playlist:

Justs won "Supernova 2016" and represented Lativa at the Eurovision Song Contest 2016 in Stockholm. His song "Heartbeat", written by Aminata, ended on 15th place in the Eurovision final with 132 points.

The winner of "Supernova 2017" will be honored to represent Latvia at the Eurovision Song Song Contest 2017 in Ukraine. Who will participate in one of the semi-finals on 9th or 11th May 2017 in Kyiv?


Find out more about "Supernova" here: