Finland: Exclusive! Interview with Knucklebone Oscar & The Shangri-La Rubies "'Cavemen' is about letting go and just giving in to the music and dance however you want to" 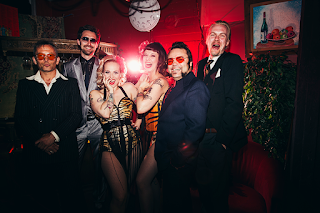 Knucklebone Oscar & The Shangri-La Rubies are one of the finalists for "UMK 2017" with their  song "Cavemen". They will participate in the Finnish national final of "UMK 2017" on 28th January 2017.

We talked to Knucklebone Oscar & The Shangri-La Rubies some days ago about their participation in the Finnish national selection "UMK 2017". Read our interview with them below to find out what they had to say... 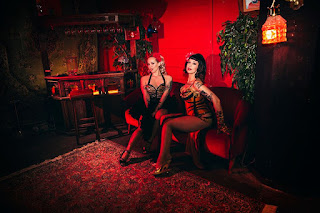 Hey guys, first of all gratulations that you are one of the qualified participants for the Finnish national selection “UMK 2017”.

How does it feel to be part of national selection with the song "Caveman"?


Feels Great! It’s an honor and a privilege. It’s been a tough competition to get to the top 10.

Who had the idea that you could participate in the Finnish national selection and who decided "Caveman"?


Several people suggest us that this could be just what the completion needs! A whole bunch different than the usual ESC music style with an impressive live show. We would not have thought of it ourselves at first!

Could you tell us something more about the collaboration between Knucklebone Oscar & The Shangri-La Rubies for this competition?


Well, we are quite an odd team, as we come from very different angles of showbiz. And maybe that is in fact why we are so unique and interesting. Knucklebone Oscar is a rock and show monster with an already 20+ years career of playing and recording old school rock n’roll and blues all over the world. One of his trademarks is a crazy over-the-top live show with lots of guitar soloing and fooling around. The Shangri-La Rubies is a highly regarded Burlesque show duo with an equally impressive reputation and experience of delivering visually stunning and entertaining burlesque shows. We initially put our things together to do a kick-ass old school rhythm n’ blues & burlesque show with a full band. We all love to, and live to perform and entertain, full blast and live. A couple of odd twists and some luck threw us into the Finnish Eurovision contest, as it’s all about show, fun and music. Here we are, ready to rock!

What is the message of "Caveman"?


Well, it’s a party rock in the vain of Tutti frutti with a whole lotta be-bop-a-lula. It is about letting go and just giving in to the music and dance however you want to. It’s simple, no fuzz about it, it’s coded in our DNA.


Knucklebone Oscar started already in 1993, first album release 1996. The Rubies have both studied music in their youth (classical and folk) but as adults been working mainly with showbiz. We have met first many years ago performing at the same gigs but only recently started really working together. We talked about collaborating for some time and our first collaboration was with the ladies performing in Knucklebone Oscar’s music videos.

What are you expecting in the national selection “UMK 2017”, are you excited?


We expect a really tough contest! Lots of fun and excitement! Of course we expect to be chosen, as we are the best and most original option to represent Finland in the ESC!


Oscar: I will sing the song couple of times through in my mind and have a glass of dry Prosecco.

The Rubies: We run our own studio where we also have a good chance to rehears our show!


Oscar:The ESC / EBU logo from waaaay back, watching the contest from old B&W set with my parents in the late 70’s.

TurrrboCherry: Yes it was a tradition to always watch the Eurovision with the family. And we were allowed to stay up late on that night!

What are your plans for 2017 besides UMK, are you planning to continue the collaboration?


Yes! As we mainly are a full blues & burlesque live show with a bigger band (we perform as a sextet). We first started this collaboration mainly for the sake of live gigs. For us UMK is actually just a bonus ;) We hope to do a lot of gigs and performances as that is what we live for! 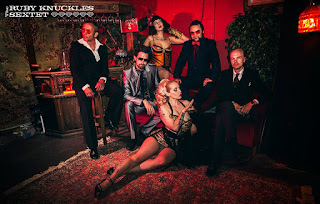 If people outside Finland never heard about you before – what should they know about you?

Why should the Finnish audience vote for your song to represent Finland at Eurovision 2017?


The answer to that is that we are different and crazy fun and this could really stand a chance to gain peoples interest. We are not similar to any former winners, no stereotypes about us, and see that as a strength.


Spread the good word of Knucklebone & The Rubies gospel and help us get to the ESC! It is the rock foundation and the only truth.

Thank you so much for answer those questions. Good luck for you and your song in the UMK 2017 and maybe we see us in Kyiv!

Support Knucklebone Oscar & The Shangri-La Rubies and their music. Listen their "UMK 2017" entry "Cavemen" on Spotify:

Find out more about Knucklebone Oscar & The Shangri-La Rubies and follow them: