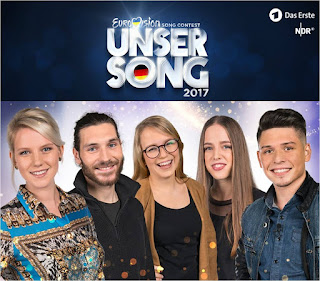 German broadcaster NDR revealed today five candidates for the German pre-selection "Unser Song 2017". Five young talents are in the battle to win the ticket to Kyiv. The national final takes place on 9th February 2017 in Cologne. The show will be hosted, as in previous years, by Barbara Schöneberger.

Here you can see the speed datings with the chosen participants...

The national final is already sold out. But you can still can get tickets for the rehearsal in the afternoon. Book it here.


The judges will only coment the performances, they don't vote!

Jamie-Lee won "Unser Song für Stockholm" and represented Germany at the Eurovision Song Contest 2016 in Stockholm. Her song "Ghost" ended on last place in the Eurovision final with only 11 points.

The winner of "Unser Song 2017" will be honored to represent Germany at the Eurovision Song Contest 2017 in Kyiv. As one of the BIG 5 countries is Germany qualified to participate in the Eurovision final on 13th May 2017.