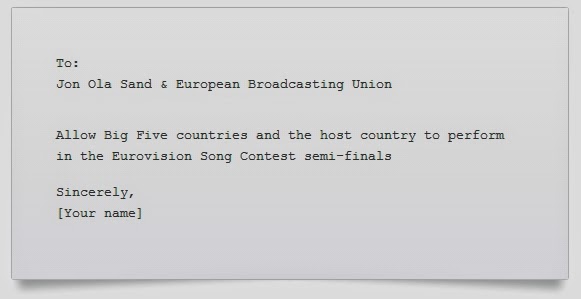 Some days after the Grand Final took place in the B&W Hallerne in Copenhagen a petition for the Big Five countries were started from Andy Grace (United Kingdom).

Big Five countries, their songs and the places in the Grand Final on 10th of May:


Since some years a lot of people thinking that participants from the Semi-Finals have bigger chances to win the Grand Final. Countries which have to qualify in one of the two Semi-Finals are promoting the songs more than the Big 5. In the last years mostly the Big 5 haven't got good results in the Grand Final. Well, Lena from Germany won in 2010 in Oslo with her song 'Satellite' the Eurovision Song Contest and brought the show back to Germany for the second time. Has it really only to do with the Big 5 thing? Do you think the Big 5 countries should also qualify in the Semi-Finals?

Find out more about the petition and if you think the same, support it: