CONCHITA WURST: On tour with Lady Gaga? Praises from other Stars 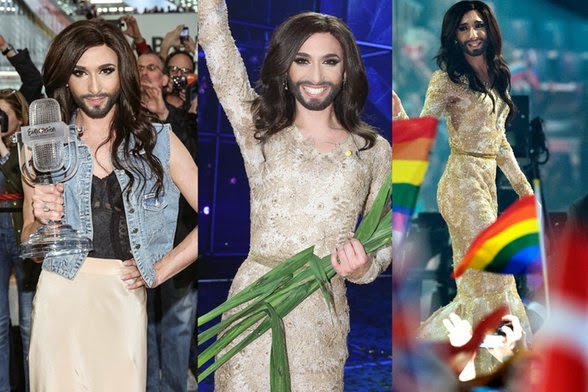 After winning the Eurovision Song Contest in Copenhagen and returning to Austria, Conchita Wurst got congratulations from all over the world.

Udo Jürgens who won the Eurovision Song Contest in 1966 for the first time for Austria were shoked at the first sight, that Austria will send a woman with a beard to the contest. But after seeing her in several talkshows he was transformed into a fan of her because she were different but really serious and not as expected someone who is just a drama queen but also a wise person who excactly know what she is telling.

Pop diva Cher who is in the buisness for serveral decades is facinated by the winner of this years Eurovision Song Contest and asked out loudly if someone can imagine about how many tears this woman (or the man behind Conchita) must have cried to remain true to herself/himself and the courage she had to live her dream.

And now Lady Gaga, one of the most popular musican over the last years put on twitter: "Conchita Wurst, you complete me". Now oe24.at and the Huffington Post reported that Lady Gaga is in big favor of the idea to take Conchita to her artRAVE: The ARTPOP Ball’-tour. Up to now just the gig in Istanbul on the 16th of September is in discussion, but according to the Huffington Post, Lady Gaga is willing to open more dates to Conchita.

So congratulation to Conchita not lonly to the great sucess to the win of the ESC 2014 but also to the great respect other musicans show her.