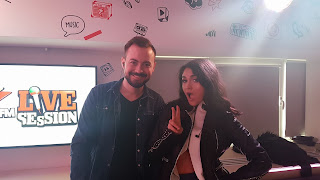 Timebelle won the Swiss national final of "Die Entscheidungsshow" on 5th February 2017. The will represent Switzerland in Kyiv with the song "Apollo".

Last week the band has been invited to Bucharest, Romania, to play a acoustic version of their Eurovision entry "Apollo" live on ProFM.


Lead singer Miruna Manescu released a solo single just as RUNA in January 2017. So the band played not only their Eurovision entry. They also performed "Blestem" from Miruna's solo project and it sounds like this..


Timebelle already have been confirmed to promote their song "Apollo" at the this years edition of Eurovision in Concert 2017 on 8th April in Amsterdam.

Support Timbelle and their music. The Eurovision entry "Apollo" isn't already available. In the meantime listen to their latest EP "Desperado" and download it on iTunes or listen to it on Spotify:

Timebelle will represent Switzerland at the Eurovision Song Contest 2017 in Kyiv. They will participate with "Apollo" in the second semi-final on 11th May 2017 in Ukraine.

Find out more about Timebelle here: