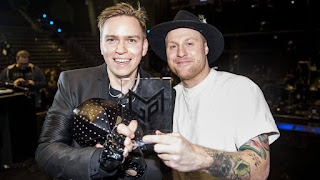 On Saturday the Norwegian national final of "Melodi Grand Prix 2017" took place in Oslo, hosted by by Line Elvsåshagen and Kåre Magnus Bergh. There was a line-up of 10 competing contestants. Four of them made it to the "Super Final":

In the end it was JOWST feat. Aleksander Walmann who won the competition against rock band Ammunition. They will represent Norway at the Eurovision Song Contest 2017 in Kyiv with the song "Grab The Moment".


"Grab The Moment" was written and composed by Joakim With Steen (JOWST) and Jonas McDonnell.

Support JOWST feat. Aleksander Walmann and their music. Download their Eurovision entry "Grab The Moment" on iTunes or listen to it on Spotify:

JOWST feat. Aleksander Walmann will represent Norway at the Eurovision Song Contest 2017 in Kyiv. They will participate in the second semi-final on 11th May 2017 with the song "Grab The Moment".