Finally! The long wait is over - this morning announced Australian broadcaster SBS who will follow into Guy Sebastian's and Dami Im's footsteps representing Australia for the third time in Eurovision.

It's Isaiah Firebrace who will represent Australia at the Eurovision Song Contest 2017 in Kyiv with the song "Don't Come Easy".  The song was premiered this morning on SBS with a live performance of Isaiah:

Watch here the official video of his Eurovision entry:

The 17 young singer is well known for winning the eight edition of "X-Factor Australia" with the song "It's Gotta Be You". His winning song made it to the sales charts in Australia, Newzealand, Denmak, Netherlands and Sweden. Isaiah released his self titled album "Isaiah" on 9th December 2016 and reached #12 in the official Australian sales charts.

Support Isaiah and his music. Download his Eurovision "Don't Come Easy" and his debut album "Isaiah" on iTunes or listen to it on Spotify:

Isaiah will represent Australia at the Eurovision Song Contest 2017 in Kyiv. He will participate in the first semi-final on 9th May 2017 with the song "Don't Come Easy". 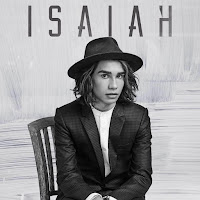 Find out more about Isaiah Firebrace and follow him: