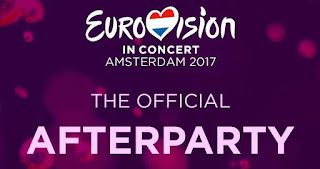 The big day is very close where the most of this years Eurovision Song Contest contestants will be part of the biggest ESC promotion event of the year - the Eurovision in Concert in Amsterdam. More than 30 contestants are confirmed and you think that's all?! Of course not!

Already on Friday, 7th April 2017, it will be the warm-up party "Amsterdam Calling", organized by OGAE Nederland. To get in the right mood for Saturdays main event there are former Eurovision contestants confirmed to perform on stage of Club Lite. Tamara (ESC 2008), Tijana Dapčević (ESC 2014), Baccara (ESC 1978), Mihai (ESC 2006) and Esther Hart (ESC 2003), who will host the evening.

After the main event on Saturday in Melkweg there are two Aftershow parties. One of them is in the venue of Amstel 54. DJ of the night is DJ FirstRank, who is one of the official Eurovision DJ's. Entrance is free. More details you can find here. Besides that there's the official after show party, organized by the team of Eurovision in Concert. Once again the party returns to Vondel CS. Tickets are available in Club Lite on Friday and in Melkweg on Saturday.

As promised their are performing some of this years contestants - these are confirmed:

Six acts are performing for sure in Vondel CS, but who knows, maybe some others will follow...