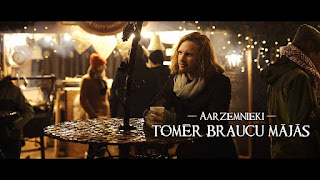 Latvian band Aarzemnieki spread positve energy as they represented their country at the Eurovision Song Cotnest 2014 in Copenhagen with the song "Cake To Bake". Yesterday they released a new song called "Tomēr braucu mājās" and yes, it's christmas time in the streets of Latvia.

"Tomēr braucu mājās" was written and composed by Jöran Steinhauer and Gunti Veilandu. The video was shot in seven hours, mostly in the streets of Riga Old Town. Video director was Ivo Skanstiņš.

After releasing some follow-up songs like "Cietos Vākos" or "Cauri Grobinai" the band is still working on their debut album. The album release is planed for early 2017.


"We 'Aarzemnieki' want to contribute to help understand those people who have a genuine interest in Latvia and Latvian language - regardless of nationality or the place where they were born." said band singer Jöran Steinhauer.

Support Aarzemnieki and their music. Download their Eurovision entry "Cake To Bake" on iTunes or listen to it on Spotify: