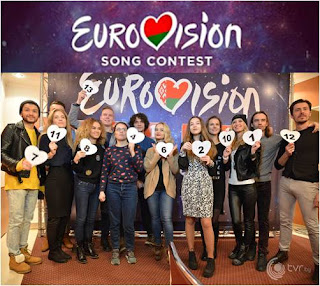 The Belarusian braodcaster BTRC announced the running order for the national final of "Eurofest 2017", which takes place on 20th January 2017 in 600 Meter Studio in Minsk. Between 4th and 24th November 2016 BTRC received 67 songs in total. On 30th November a jury panel selected the contestants for the national selection. The show will be hosted by Olga Ryzhikova and Teo (ESC 2014, "Cheesecake" #16)


Ivan won "Eurofest 2016" and represented Belarus at the Eurovision Song Cotnest 2016 in Stockholm. His song "Help You Fly" failed to qualify to the Eurovision final by ending on 12th place in the second semi-final.

The winner of "Eurofest 2017" will be honoured to represent Belarus at the Eurovision Song Contest 2017 in Ukraine. Who will participate in one of the Semi-Finals on 9th or 11th of May 2017 in Kiev? Stay tuned..