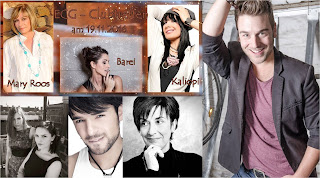 On 19th November 2016 there will be the 16th Eurovision Club Germany club event. Eurovision fans from all over Europe will come together in Cologne to celecbrate in the heart of Cologne.


Barei was with no doubt one of the party girls this year in Stockholm, where she represented Spain at the Eurovision Song Contest with the song "Say Yay!". A few minutes before Eurovision released Barei a special edition of her album "Throw The Dice".


Marianna Zorba represented Greece at the Eurovision Song Contest 1997 with the song "Horepse" (#12). She will present Greek ESC fan favorites in Cologne in her own special version.

Duo Aurata are the girls Yvonne Grünwald (knwon from the band Elaiza, ESC 2014 "Is It Right") and Teresa Hoerl. They will present a special arranged Eurovision medley in Cologne.

Seyran participated in the preselection in Azerbaidjan in 2011 with "Waiting For Your Call" and ended on 5th place. This year he will represent Germany at the Turkvision Song Contest.

The event is already SOLD OUT since weeks, so we hope you all booked your ticket in time!

Find out more about the event and how to get your tickets here:

Last years Club event was a huge success and we think you shouldn't miss the chance to join this event in the center of Cologne! You missed it? Watch some videos from last year here:

After the official program there will be a Eurovision Disco till the early morning light with DJ Ohrmeister..