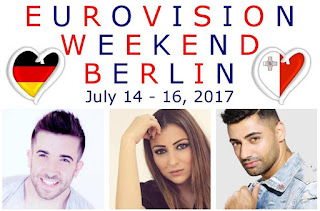 The sixth edition of the Eurovision Weekend takes place between 14th and 16th July 2017 in Berlin. In collaboration with OGAE Malta the team of Eurovision Weekend will organize a event with former Eurovision contestants from both countries. For this year are already three live acts confirmed and here they are:

Get your tickets here:

Ticket price for the whole weekend (incl. Pre-Party on Friday, Main event on Saturday, Brunch on Sunday) is only 36 Euro.

Find out more about Eurovision Weekend and the inviting fan clubs: