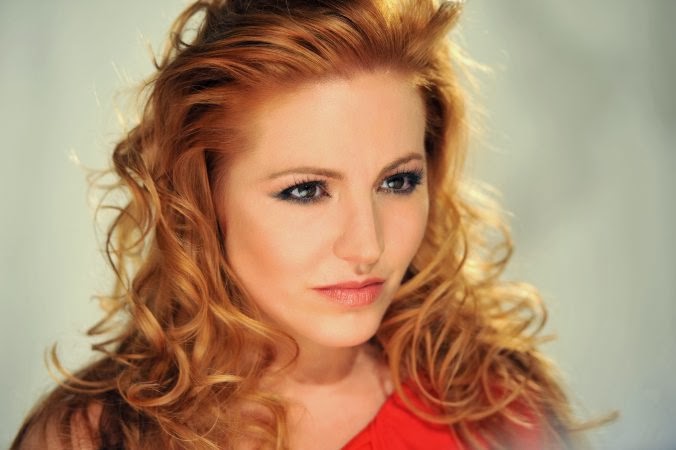 Valentina Monetta has represented her country at the Eurovision Song Contest in 2012 with 'The Social Network Song (Oh oh uh oh oh)' and last year in Malmö with her song 'Crisalide (Voila)'. In 2012 she only reached place 14th in the Semi-Final. Last year she reached 11th place. Her song was very popular in the competition but it failed to reach the grand final.

After this dissapointment the director of San Marinos broadcaster SMRTV called Valentina and told her about his wish, that she should represent San Marino once again at the competition in Copenhagen.

Last saturday at the OGAE Germany 'Club Event 2014' in Munich we had the chance to talk to Valentina Monetta and her composer Ralph Siegel. Read what she has to say about her participating in 2014.

Valentina, you will represent San Marino in the Eurovision Song Contest 2014 for the third time. How does it feel for you?

Valentina: It’s incredible. It’s a great situation. I’m very proud and I’m very happy. This is for me a evolution.


Last year in Malmö your entry called ‘Crisalide (Voila)’ and it was very popular in Malmö and the competition. A lot of people were very shocked as you failed In the Semi-Final. What have you thought after you realized ‘I’m out of the contest. I will not be on stage again at the grand final on Saturday..’?


Valentina: Ok, I’m was out of the contest. Eurovision Song Contest is a contest. At the end I’m very satisfied. This is wonderful for me. And I will be there this year once again :-)


Last year it was very quickly chosen that you will represent San Marion in Eurovision 2014 again. Who had the idea and how that comes?


For now we only know that you will be again on stage. Can you tell us something about which kind of song you will perform?


Valentina: We don’t know yet. We have to decide it.


Which music style will it be?


Valentina: We have a lot of styles and music. Today we don’t know. Maybe in the end of March you will know something.
Ralph: We are in the final situation right now. We have three possible songs. We still have not decided which of those three.


Those three songs have a different kind of style?


Is it decided if you will sing in English or Italian?


Ralph: That’s also a problem. Maybe she will sing in English, maybe in Italian or maybe in German or in Japanes. *both are laughing*
Valentina: We have three songs recorded in English and Italian. Next week we will send them to the broadcaster.


Are you planing to shoot a promotional video for the Eurovision entry?


Valentina: Yes of course. We are planing to do that in the next weeks. But I can’t tell you more about that for now.


What was the most excited moment for you in Malmö and the year before in Baku?


Valentina: The concert I gave in a club in Malmö with my jazz band. This was a big present from Ralph for me. That was a very great moment I remember. And a second moment was as I finished singing on stage and everybody was looking at me. Those two moments were very great to remember.


Valentina: I’m very cool and relaxed with myself. I loved all the artists in the Eurovision song contest. I love music.


What is your favorite Eurovision song ever?


Valentina: Oh I remember the Eurovision 2011. The song from Raphael Gulazzi ‘Madness Of Love’ from Italy. I follow Eurovision Song Contest since 2011. Now I learn with Ralph the artist which was participating the best.


Ralph wrote so many songs for the competition. Which is your favorite one?


Valentina: Of course the songs which he wrote for me – ‘Crisalide (Voila)’ and ‘Facebook’. :-)

Ralph: She is a great writer too. She wrote great songs.


Valentina did you wrote one of the possible Eurovision songs?


Valentina: Yes of course.
Ralph: She wrote nine songs. One better than the other.


What are you music plans for 2014 besides the Eurovision Song Contest?


Valentina: Well, in the end of March we will release my new album with my own songs and from Ralph. I wrote 50% from the songs, and Ralph wrote 50% of the songs. Between us is a big passion in the collaboration. I’m very satisfied with the the album. We have a lot of music what we wanna give to all the people.


What will be the title of the album?


Ralph: We can’t tell something about that right now. The release date will the 14th of March. And than everything will be out.


What are you expecting tonight at the OGAE Germany Event?


Valentina: I wanna enjoy and have fun. I will sing in the way very cool and very easy. I wanna stay with my fans. Everyone here is very kind. This is incredible. I feel the love of the people. I wanna give my love to the people with my voice.


How long will you perform tonight?


In April will be the ‘Eurovision in Concert’ in Amsterdam. Are you planing to join this event?


Valentina: Yes, absolutely. This is a very good event. I love Amsterdam.
Ralph: It’s a good afford. It takes a lot of time to travel for Valentina. She will be there.


What is the difference between Valentina on stage in Valentina in private?


Valentina: I’m like Heidi. You know Heidi the cartoon? *laughs* I’m so simple, so spontaneous. Maybe it seems if I’m on stage Valentina is like a diva. But I’m not a diva. The Eurovision Song Contest learned me a lot of things. And I have to learn to respect my job. In my private I stay very relaxed and cool. Well.. my voice is the same. My heart and my soul is the same on stage.


Do you have any favorites?


Valentina: Oh I listen to jazz and blues, blues pop. All this types which gives me some emotions. Music is a big word. I prefer black music in classic. And I love so much swing music. There are a lot of singers which I love so much. I don’t have one big artist now. I listen to music in all the parts of the colour.


What are you expecting in this years Eurovision?


Valentina: I don’t know. Maybe a big success. Maybe a possibility to continue my career out of the Eurovision Song Contest. I wanna be on stage and give my voice and the great music of Ralph to all the people around the world.


Thank you so much for answer those questions. Have fun tonight at the OGAE Germany 'Club Event' and good luck for you and your song in Copenhagen. See you there!